A small request came to us from one of our Twitter followers @Noseyp1 who asked "please do something on Syd Abrahm he was my Grandma's cousin ;) all I have is one sentance and one pic x " so we could only oblige.

Syd Abram is the gentleman in question and played for Wigan between 1926-1932 appearing 171 times for the Cherry and Whites scoring 48 tries, 1 goal. Syd played at stand-off or centre in an immortal Wigan team that included Jim Sullivan, Johnny Ring, Tom Parker, Lou Brown and Wilf Hodder. Mr. Abram's claim to fame is that he scored the first ever Wembley try in the Cup Final against Dewsbury on May 4th 1929, at around 3.15pm. Wigan scrum-half Arthur Binks (who later was awarded the MOM) sent Abram away on a 40 yards dash but Syd was blocked trying to find Lou Brown. Abram then cleverly skipped around Dewsbury fullback Jack Davies to score in the corner and claim the first ever Wembley try. Jim Sullivan missed the conversion.

Syd played stand off that day but Syd nearly didn't get the chance to play for Wigan - he thought he wasn't good enough! In 1925 he signed on for Salford aged 19 but here came the twist. Syd had played in the Intermediate Section of the Wigan Junior League and the Wigan club had first claim on lads who play in this section. A rugby referee Frank Fairhurst told Wigan not to miss Abram, so after three weeks' stay at Salford, Syd came to Central Park, signing on in September 1925, as a stand-off.

For about a season and a half Syd played in the Wigan "A" team until the day came for his call up. Tommy Howley, a main-stay in the Wigan squad got injured so Syd made his first appearance with the senior team as partner to Johnny Ring, of all people. Not at all daunting for a young lad. The opposition was Widnes at Naughton Park yet it was a good debut as Wigan won 35-2. Syd scored his first try on debut! Johnny Ring scored a hat-trick so not bad setting up Ring and scoring on debut! He went on to make 19 appearances that season, scoring 4 tries. After only making 8 appearances in the 1927/28 season, it was in the 1928/29 where Abram cemented his place in the Wigan first team. He made 40 appearances, scoring 10 tries, including his famous Wembley try. He once scored a hat-trick in 1929 against Broughton Rangers in a season where he made 43 appearances, scoring 13 times.

Syd began his career in Hindley, playing for Hindley St. Peters boys' team, and captained the Wigan Old Schoolboys when they lowered the colours of the unbeaten Hunslet Old Boys, beating them at Hunslet, on Easter Monday 1924 - The first bit of rugby Syd came to be proud of.

Fast forward to Syd's greatest moment and we're back at Wembley, 1929. The Wigan team only had 3 Wiganers in it: that of Syd Abram himself, John Bennett and Jack Sherrington. Dewsbury, on the other hand had a team full of local lads. Syd recalled many years later that great day:

"Our forwards mauled for the ball - the play-the-ball was different in those days - just around the centre line.

"A pass came to me and I simply started to run. I kept on going, all the time expecting to be challenged. I thought I may have to pass the ball but suddenly there was a gap. Lou Brown kept shouting "Keep going Syd" and then there was the line. One of their players just arrived to tackle me but it was too late, I was over.

"There was no kissing and cuddling like there is now. I just ran back towards our half and as I did one of our players shouted "Good lad Syd, the first man to score a try at Wembley and he comes from Wigan!"

"It was the first RL Final to be played at Wembley and we all thought it was very strange. We couldn't understand why it had to be played down South when all the fans had to travel from the North (5,000 Wiganers turned up). But once we settled down we thoroughly enjoyed the occasion.

When Syd returned home to Hindley after the Cup win he was met off the tram by cheering crowds. "They carried me shoulder high down Liverpool Road and as we passed the Bridgewater public houses everyone threw their caps in the air and raised their beer mugs. It was a wonderful day.

"We each got £3.15s winning money and a £7 bonus. But the pack got ten bob less - the Club thought they didn't earn as much as the rest of the team!"

The thing is, most people have never heard of Syd, or know that he scored the first ever Wembley try unless you look into it. Does that matter? Of course it does. It isn't just the Jim Sullivan's or Johnny Rings, names that roll off the tongue, that matter to Wigan's history, it is the team. If the great Tommy Howley didn't get injured then who knows what would have happened. Many people don't remember Mick Cassidy in the 1994 Wembley Cup Final against Leeds, but without his run, would Offiah have scored his second sensational, memorable try? Syd Abram matters to Wigan RL, so too does Lou Brown, Jim Slevin, Jimmy Birts... Syd wrote his name into the history books, Tommy Martyn knows how that feels scoring the last try at Central Park.

I hope this goes down well with
@Noseyp1 who wanted to know a bit about Syd. Wembley 1929 was his moment of history and an historic afternoon in the history of Wigan Rugby League. Syd's story didn't end there, he was later transferred to Bramley with whom he captained until he retired. He later became a fireman with the Royal Marines at Risley. In 1939 he passed the Rugby League referee's exam and went on to do some officiating. 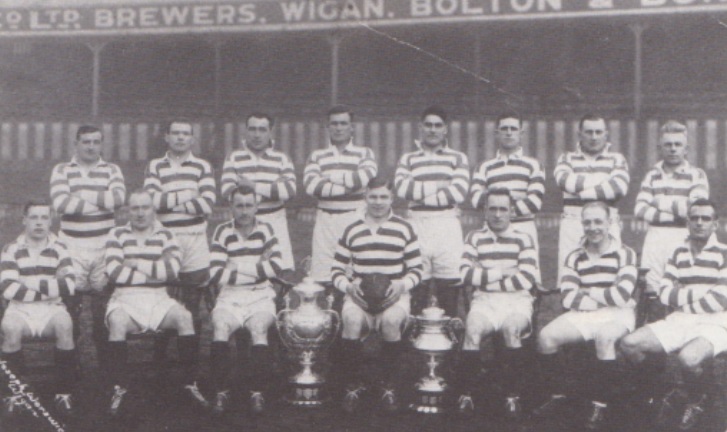 Syd Abram is on the far left, front row with the Wigan team that won the Challenge Cup and Lancashire Cup
﻿
Posted by MS at 13:41 No comments:

MS
Wigan, Lancashire
Hi, I'm Marc the author of this Blog. Interests include Rugby League, Cycling (pic), social history and teaching 6 and 9 year old kids why St Helens is bad for their health.